Now that we have distributed the initial ROBOT to genesis members, it’s time to finalize the Ops/Gov and WSC member distribution.

Please forgive me if I got any details here wrong, or if I missed anyone. Feel free to post here to DM me to correct the mistake or to get added to this list if you made any significant contributions early on. This allocation is only for retroactive distribution for any contributions that happened before ~September, the 12,000 Ops/Gov tokens for the $50k - $100k sales milestone are not included in this and will be distributed in a similar fashion once we hit that milestone.

I added a poll in here just to get a general sentiment check, but if there’s no major concerns or blockers by Monday I will put it up for official vote on Snapshot. Will keep the voting period open until Friday for this one since its a more significant decision and I want everyone to have time to read it and give their 2gwei.

Not necessarily a deal breaker for me, but is there a reason that the WSC club tokens aren’t being paid in proportion to price paid like the Genesis Jacket distribution?

Yeah 3+4 resonate with me. With respect to 2, I generally think we should shy away from rewarding loyalty and focus on value add. That being said, I’m voting yes.

@jim Made a good point about how lex_node’s allocation is the same as JY but lex_node got paid and JY didn’t, so it would be more fair to reduce the allocation for lex_node.

Also, it was brought to my attention yesterday that we missed one member in the list of original ROBOT distributions. You can see in the Google sheet that there’s only 41 members listed. However, the calculation for ROBOT was splitting the 30k tokens evenly among the 41 members, so that person is owed 597 ROBOT still. We need to come up with those tokens somewhere, so this would actually be a good place to do that from and kill two birds with one stone by reducing lex_node’s allocation to 403 and giving 597 ROBOT to the last member.

I have updated the allocation as follows, please update your votes in the original post if you disagree with this: 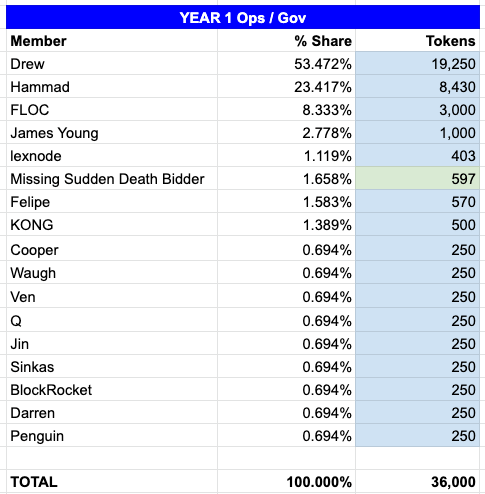 We discussed this on the last call, Just to make sure it is documented here:

If MetaFactory does a sale in the future which is token based for a membership or something else that might not look like a product, we are not going to reward the individual who buys in early, puts out money and takes the risk on that opportunity (which could succeed or fail)

We are only going to reward the person who ends up redeeming the membership or similar?

So if there were another release, and someone bought the token/membership and the risky project goes nowhere (say it fizzles out), he gets no ROBOT tokens even though he contributed real money?

The WSC membership thing was a one off exception, we likely will be reworking membership to work differently and not have a separate redemption step, so we wont have that issue.

However we still might be allowing people to redeem products with NFTs in the future vs buying directly, and in that case I still think the ROBOT should go to the person who redeems the product and not the person who was only speculating on the product to flip it or something. Speculators are taking the risk for their own personal profits, it doesn’t really make sense to reward them with governance power IMO. Also, it solves the issue of wash trading and stuff too if we had to deal with people trading NFTs.

For those types of products, we will likely sell them on increasing price curves or bonding curves or something, but have a fixed number of ROBOT included in each instead of being a function of how much someone paid since the price is all over the place and it doesn’t align incentives nicely with early supporters.

e.g. lets say there’s a product we are selling 50 of on a bonding curve starting at $10 and ending at $500. We can use the average price of the product to determine how much ROBOT each product redemption would get. e.g. if we were to sell all the products we make $10,000, then each redemption would get ROBOT equivalent to if they spent $10,000 / 50 = $200 in the shop.

There has been a lot of discussion in the past week+ about the form that brands and brand memberships now take - particularly as it pertains to $ROBOT. As we know, Wicked Sunday Club was introduced prior to the existence or idea of $ROBOT. It is, however, one of the core drivers for its creation. We wanted to open up access to and participation in our brand factories (and MF generally). Its creation also means that all Wicked Sunday Club members will soon become MetaFactory members as well. :tad…