iROBOT Season One Recap + Next Steps

Happy New Year! We want to start by saying a big Thank You to all the individuals, teams, artists, projects, communities, and brands who comprise the ROBOT family and helped to make MetaFactory’s collective dreams a reality. None of this would have been possible without the amazing creativity, ingenuity, dedication and hard work of you. 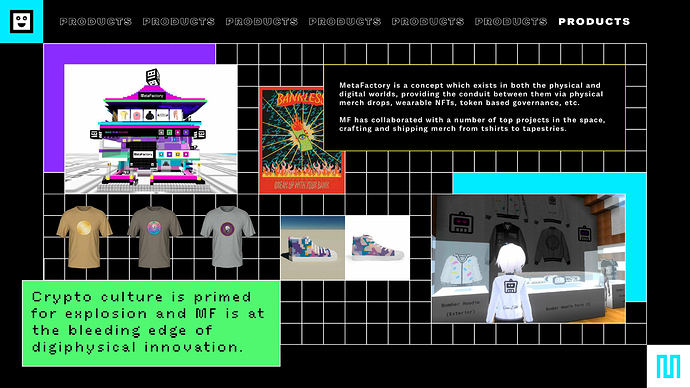 A Quick Rundown of MetaFactory’s 2021 Accomplishments by the Numbers (approx.):

Stay tuned for a more thorough recap of MetaFactory’s 2021 accomplishments and plans for 2022!

There is no shortage of notable 2021 successes, but one of the most exciting was the emergence of iROBOT, a decentralized community and fundraising mechanism to grow MetaFactory.

Throughout the course of 2021, MetaFactory was approached by a number of interested investors. However, after some discussion with the community, we were reluctant to take on any external funding or large capital partnerships at such a nascent stage. We have big aspirations, far beyond just a simple merchandise marketplace, and it is critical that any investor is aligned with our vision. Additionally, we wanted to ensure that any investment into ROBOT benefited the entire MetaFactory community equally — in short, we wanted it to be on-chain.

In September 2021, MetaFactory joined a number of teams and individuals who are part of the MetaCartel ecosystem at MCON 2021 in Denver. During the event, MetaFactory threw its first ecosystem party, which included a pop-up shop. We were overwhelmed by the response from the community and the following day, an effort emerged to help support MetaFactory’s growth. Led by the Fire Eyes and DAOHaus teams, a new DAO was formed to coordinate ROBOT liquidity on a large scale through on chain governance: iROBOT. 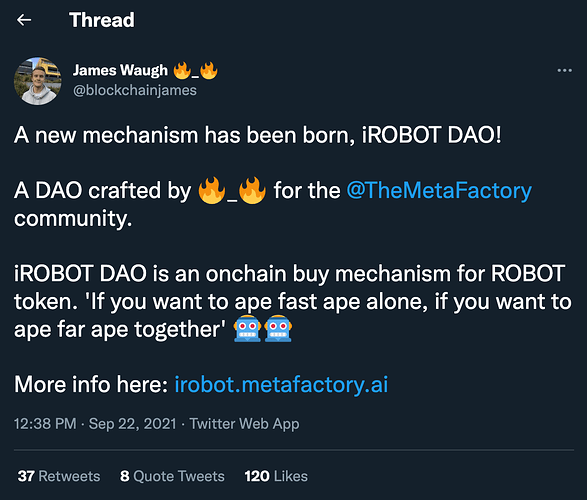 By taking a decentralized approach, the iROBOT DAO was able to collectively coordinate and permissionless-ly deploy a large amount of capital in support of the MetaFactory project and community. Acting as a decentralized seed round, the 171 members of iROBOT were able to dollar cost average into a large ROBOT position early in MetaFactory’s growth. By specifically leveraging a Balancer LBP, iROBOT DAO was also able to avoid any front-running/sandwich attack bots, as well as save on gas fees.

To learn more about the technical details and approach, please check out this post by Robot Isaac.

iROBOT Results by the Numbers:

The final result was a doubling of both ROBOT price and liquidity (during a general languishing winter market) and at a reasonable cost basis (~$92/ROBOT)to the iROBOT members.

One of the most impressive outcomes of this initiative was highlighting a new weapon for slaying Moloch. Could each of the iROBOT members have individually purchased ROBOT via the open market instead of as a group? Sure, but such a zero sum approach pits each individual against one another. Instead, the iROBOT members embraced MetaCartel’s core tenet: ‘If you want to go fast, go alone. If you want to go far, go together.’ They demonstrated the power of effective coordination and as a result, established a better cost basis for all members. Additionally, the approach demonstrated that groups of motivated individuals are now able to coordinate and compete with large, centralized funds and deep-pocket investors. In kind, MetaFactory has decided to reward iROBOT members with additional ROBOT rewards for their collective coordination.

With the deployment of the initial ETH funds, iROBOT DAO Season One has officially concluded, but we’re just getting started!

Participation in iROBOT Season Two is limited to v2 LPs and grants members the ability to propose and vote on new tokenomics, liquidity strategies, investment opportunities and more. 1200 ROBOT will be awarded to and voted on by the members of Season Two. This reward is separate from the normal MetaFactory Ops Distribution and will only be available to Season Two contributing members. Potential ideas include new staking mechanisms, OHM fork tokenomics, L2 liquidity mining strategies (not to mention special access to custom product drops and IRL events).

One idea we have been exploring internally is the creation of a Fuse Permissionless Lending Pool. This provides DAO members with a place to a) borrow against their holdings without giving up governance rights and b) support the DAO with interest. In turn, MetaFactory receives a high-yield source for compounding its treasury and reduce the need to potentially sell ROBOT to fund operations. 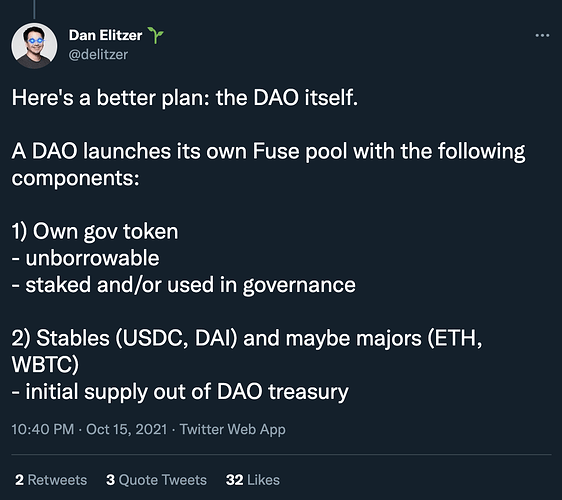