Its that time of year again

Since we pretty much hit the $1.6m milestone, the total amount of ROBOT be distributed for ops is 10,000. The proposed breakdown is as follows:

We just concluded the two Coordinape epochs, the results are below (full results can be found in this spreadsheet)

It would be great to get feedback from people on how they think these distributions went, and if the split between SourceCred and Coordinape makes sense.

The SourceCred portion of the rewards cant be distributed until we add contributions to the Contribution Tracker, so please go add any contributions you or others have made since Nov 2021!

With @penguin missed on the circle, synced up with him and figured easiest solution was have him propose an amount based off the Coordinape run. His suggestion was 80 $ROBOT based on helping with setup, some shopify support w/ me and some booth ops work.

Quick conviction vote here to add him into the split.

80 ROBOT would be higher than IRL Art who handled taking all the shipments and did our booth setup + connected us with the photo/video team to get the much needed content, and also higher than Felipe/Zico/Arashi who were there since we first arrived and helping with food / cleanup in addition to booth work and setup / packing etc. Would be unfair to them IMO. I tentatively set him to have the same amount of GIVE as Arashi

For SourceCred Retool initiatives (Contribution Tracker), had some drafts loosely evolved from Ops Distro #3, Can work on plugging it in soon if anyone would like to join and help weight the people/percentages and add things I’ve surely completely missed (screenshot posted below)

For anyone unclear on Milestone Ops Distro vs Product Distros vs the shifts to working group “subDAO” budgets to accomodate more reliable/frequent/sustainable opportunities, TL;DR would be: 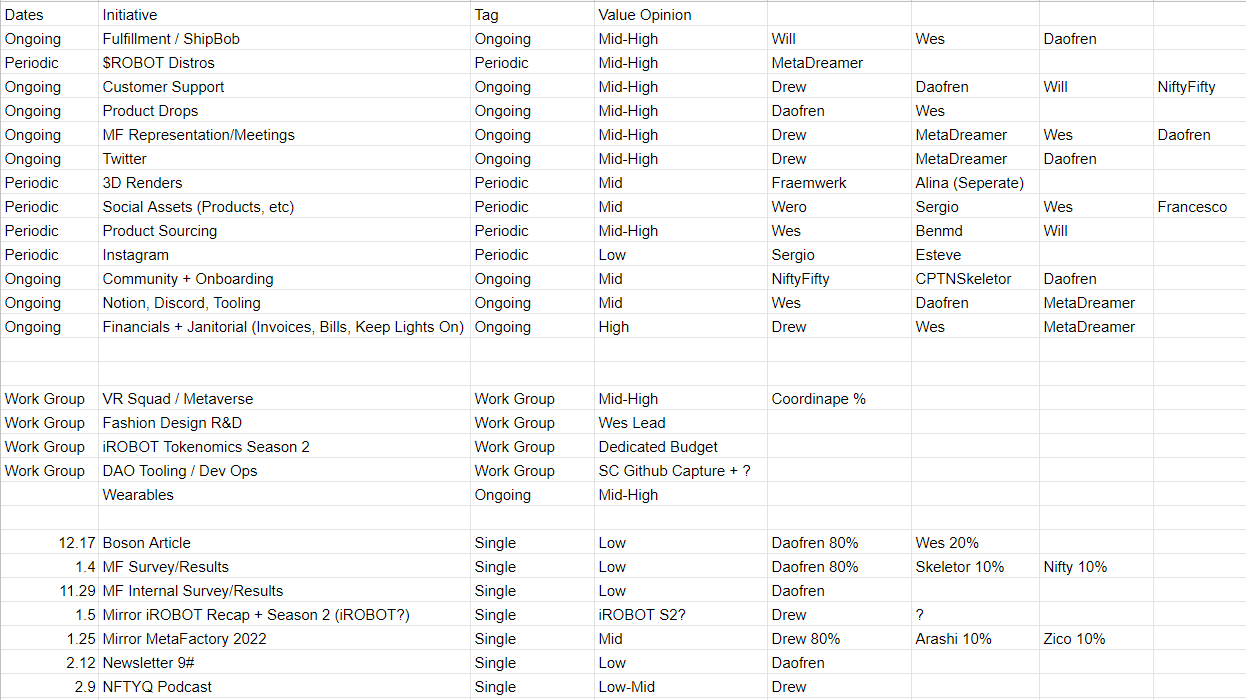 Perfecto, missed you already edited it in. Penguin approved as well

My question is whether ETHDenver’s participation is only for those who attended. I was doing banners and stand design, sub-branding and sharing instagram stories. I don’t know if you see that as being valued in that part.

Helping on that front is definitely valuable. I know your work there set a framework for Wes to work off of and tweak as necessary to get to the ETHDenver team in time for the booth build. Can create an initiative into the contribution tracker for the Pre-Event Planning/Production/Coordination. Top of my head I would say something like:
40% @weseeclearly
15% @DamagedGoods
15% Meh
10% @esepuntoge
10% @burningfiat
10% @METADREAMER

From my experience at ETH Denver, I do feel like the distribution is well paired to each members’ contributions all through those 3 weeks.

I don’t think I’d be able to judge as easily for the general Nov - Feb distribution since that involves a much bigger crew / timeframe and I’m not sure I can recall exactly what my & other’s contributions through those months were (not that these didn’t happen, my memory is just not that good

What factors determine the total amount of GIVE Tokens a group gets to distribute during each different epoch?

What factors determine the specific amount of GIVE Tokens each individual is >given (haha) to >give (haha!!) to other community members for each epoch?

another Q, unrelated to coordinape –

How is the total amount of $ROBOT to be distributed for each ops distribution instance calculated?

What factors determine the total amount of GIVE Tokens a group gets to distribute during each different epoch?

Total Give allocation to a group itself is somewhat irrelevant, as the final % breakdown translates as a % to the actual token being distributed. So $robot (and/or stable) amount for the group to budget would be more important.

What factors determine the specific amount of GIVE Tokens each individual is >given (haha) to >give (haha!!) to other community members for each epoch?

lmao. This actually needs better parameters setup and an argument for why working groups are important to capture more focused/intimate coworking insights. The default setting is 100 Give per user, but with the last distro and onboarding we had new people getting involved at the tail end of the distribution – So you want to include them and let them receive, but giving someone newer a ton of Give would skew things to “I only really know/worked with these couple people… guess I’ll give it all to them.” Same goes for rare contributors VS full-time degenerates.

Not sure what the optimal way of streamlining that part is, other than a pre-Coordinape proposal of members and Give allocations before we start it.

We could possibly migrate entirely to the working groups structure and eliminate the need for Milestone Ops Distros entirely. Then dedicate budgets for events like ETHDenver to run Ape circles with.

How is the total amount of $ROBOT to be distributed for each ops distribution instance calculated?

Its based on the sales milestones outlined in the Distribution Schedule. 10k ROBOT since we hit the 1.6m sales milestone, the 10k distributed last time was for reaching 800k milestone.

I find it interesting and optimal to value the work before and after each event.

The resulting distribution can be seen in the following spreadsheet:

There was an issue in the calculations for the Coordinape distribution and we ended up 4782 ROBOT there instead of the planned 4000 ROBOT, so I deducted 782 ROBOT from this SourceCred distribution, leaving us with a total of 3312.7 ROBOT to be distributed (some extra there that was undistributed previously because of missing addresses).

As a reminder for anyone new, this distribution is calculated by taking data / activity from Discord, these forums, GitHub (for dev work) and the Contribution Tracker.

If anyone’s address is incorrect, please let me know within 24 hrs and I can get it updated. After that will process the distribution via the multisig.